There are a handful of people who can be credited with launching the modern superhero era of dramatic, character-driven storytelling. The first name on that list is Michael E. Uslan. The young film and comic book scholar bought the film rights to Batman in the 1970s, against the advice of his mentor at DC, and set out to make a dark serious film that would contrast from the 1960s Adam West series. All the rich details surrounding his landmark 1989 Batman film and its journey to the screen are available in his book, The Boy Who Loved Batman.

For his Awards Focus guest piece, Uslan discusses his lifelong relationship with the character of the Joker — from his earliest incarnation in the comics to the numerous versions seen in film and animation, and ultimately the lasting legacy of Todd Phillips’ and Joaquin Phoenix’s R-rated masterpiece, Joker.

I’m one of the few people left standing who had the golden opportunity to meet and talk to the creators of the Joker, the legendary Jerry Robinson and Bill Finger, a creation subject to the approval of Bob Kane.

Jerry Robinson was a teenager when he became Bob Kane’s art assistant and soon ghost artist on the new Batman comic book character which had initially debuted in Detective Comics number 27, May 1939. With this comic book as one of its flagship titles, the company changed its name to correspond to it, thus becoming known to generations of fans as “DC Comics.” By 1940, Jerry felt that aside from the appearance of a monster and vampire, the everyday villains Batman was fighting each month… gangsters, racketeers, corrupt bigwigs, conspirators… were becoming too mundane and not challenging enough for a super-hero, despite the fact that this new super-hero actually had no super-powers like Superman. Inspired by what is now a very iconic joker playing card, young Jerry conceived of some thing larger than a villain… something more on the level of a “super“ villain. Excitedly, he showed his initial sketch to Batman’s co-creator, Bill Finger, the writer who primarily had shaped Batman’s costume, created his identity of Bruce Wayne along with his primal origin story, eventually dubbing the setting as “Gotham City,” which he named after a jewelry store in Yonkers, NY. Bill was a huge fan of film, including independent and foreign Cinema. Remembering a silent German expressionist film, “The Man Who Laughs,” Bill showed Jerry stills of its star, Conrad Veidt, in his pre-“Casablanca” days, and the visual depiction of the character was nailed down. Jerry wanted to write the first joker story, but Bill, as the cocreator of Batman and its primary writer, pulled rank and said that he would do the writing, but would consult with Jerry as the story developed.

The idea from the beginning was that the Joker was the antithesis of Batman. Ironically, right out of Edgar Allan Poe’s “The Cask of Amontillado,” the Joker wore the mask of the happy carnival, hiding the seething horror and evil lurking beneath the surface. Yet Batman, the symbol of all that is good, was disguised in the dark monstrous mask of a bat. Over the decades, many fans have wondered that had Bruce Wayne not been anchored to his humanity by Alfred, Commissioner Gordon and others,  after seeing his parents murdered before his eyes on the street, Bruce Wayne might have walked that thin line and gone over to the dark side and become a version of the Joker, himself. But ultimately, the person who best described this relationship between the two characters was Marvel’s Stan Lee, who explained to me that his theory of super villains was that the most successful and longest lasting superheroes in comic books have been the ones who have had the greatest super villains, because at the end of the day, it is the super villains who define the superhero. Simply put, Batman has had the greatest rogues gallery of super villains in the history of comicbookdom, and, inarguably, the greatest super villain ever created, the Joker. Spilling over into movies, I would argue that the Joker is no less than one of the three greatest villains in cinema history, as well, along with Darth Vader and the Wicked Witch of the West.

In 1979, my producing partner, Benjamin Melniker, and I acquired the motion picture and allied rights to Batman from DC Comics in order to fulfill my life’s mission to show the world that The Batman was a dark and serious superhero rather than a campy character adults could laugh at. In that era, my Joker epiphany happened on the Friday start of Memorial Day weekend 1980. I headed home from my job at United Artists and New York City and before I hopped on the bus back to the wilds of New Jersey, I picked up the afternoon paper, “The New York Post.” On the bus, I opened the paper to the movie section and saw the two big movies were opening that weekend, “The Empire Strikes Back” and “The Shining.” It was then that I saw what would become the iconic “Here’s Johnny!” picture of the maniacal Jack Nicholson in this new horror film. My reaction was instantaneous: “Oh my God! This is the only actor who could play the Joker!” As soon as I got home, I raced to my desk, tore out that picture, used White-Out to whiten Jack’s face, used a red pen to do his lips, and used a magic marker for his hair, and voilà! He was, indeed, my vision of Jerry Robinson and Bill Finger’s Joker! I saved that piece of historic memorabilia and reprinted it in my memoir, THE BOY WHO LOVED BATMAN, now out in paperback (Stan Lee always taught me to get in the plug whenever you can!). The day Jack Nicholson was hired was the best day to my career to that point.

Here is where I must pause and recognize the great actors who have portrayed the Joker on screen. They all gave wonderful and memorable performances for their times. But it is my contention that if a Mount Rushmore was ever carved to honor the Joker, there would be four figures on that mountain: Jack Nicholson; Mark Hamill; Heath Ledger; and Joaquin Phoenix. As far as I know, only once in movie history were Oscars awarded to two different actors for playing the same role in two different films: Marlon Brando for “The Godfather“ and Robert De Niro for “Godfather 2.” It may possibly happen for the second time ever if Joaquin Phoenix is honored for his performance in “Joker” to go along with Heath Ledger’s Oscar for his role in “The Dark Knight.” 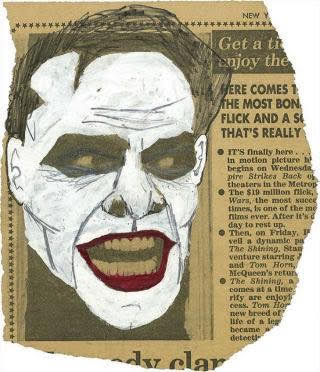 A successful movie begins with a filmmaker with a passionate and clear, bold vision, along with a great story and interesting, textured characters who transform in some dramatic way over the course of three acts. The artistic and box-office success for that with “Joker” belongs to the brilliant Todd Phillips. Three times now, over the last thirty years, a Batman related movie proved revolutionary, changing not only the way “comic book movies” can be made, but changing Hollywood, itself, and the world culture in its perception of superheroes, villains, and comic books/ graphic novels. The credit for that legacy accomplishment belongs to Tim Burton (Batman, 1989), Christopher Nolan (The Dark Knight Trilogy), and now Todd Phillips (Joker). Genius at work in each case!

In no way can “Joker” be described as a “comic book movie.” I contend it’s the most important film dealing with issues of mental health since “One Flew Over the Cuckoo‘s Nest.“ It does what cinema accomplishes in its best moments, holding a mirror up to society, warts and all. In this case, addressing society’s current  lack of civility and lack of social discourse, among other important themes.

With an historic eleven Oscar nominations, placing the film in the stratosphere of “Ben-Hur” and “Gone With the Wind,” it is the right moment to honor the entire cast and crew who brought “Joker” to life. This not only includes Todd and Joaquin for their amazing, amazing work, but the great producer, Emma Tillinger-Koskoff, and everyone who has been nominated not just for an Academy Award, but for each Guild award, a Golden Globe, a BAFTRA award, and any one of the various critics awards. Let the spotlight shine on these professionals who have each mastered their craft and brought their best game to the table in executing Todd’s masterpiece of a vision. ConBatulations to all. Personally, you all have made this comic book fan-boy’s dream come true, and in addition to being your number one cheerleader, I thank you straight from my heart.